How Coachable Are You? Most organizations agree that coaching is important, but they do virtually nothing to make employees more receptive to coaching. Moreover, misperceptions about how someone will respond to coaching shuts down a lot of valuable conversations before they’ve even begun. People working in these companies pay a high price. Many develop blind spots, not realizing the seriousness of an underlying performance issue. Keeping up a personal practice of being coachable allows you to stay in touch with your impact on others.

What does it mean to be coachable?

A person who is coachable not only responds well when given feedback, they ask for feedback. They view the input from others as a valuable tool in their development. They also are willing to take actions and make personal changes based on the feedback.

In a TV interview, I was asked, “Wouldn’t requesting feedback from others cause them to view you as unsure of yourself and being less competent?” I replied, “Whenever anyone asks me for feedback, my impression is that this person is self-assured, competent, and courageous. They want to know how to improve. But perhaps I have been influenced by my research.”

What research tells us about the correlation between competence and coachability? 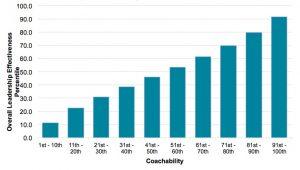 The graph above is based on results from over 50,000 leaders. Each leader was assessed on their coachability and the perception of their overall leadership effectiveness based on 46 behaviors. The assessment collected feedback from an average of 13 people, including managers, peers, direct reports and others. Those who were rated as being the least coachable (1st to the 10th percentile) had an overall leadership effectiveness rating at the 11th percentile while those who were the most coachable (91st to the 100th percentile) averaged the 92nd percentile. 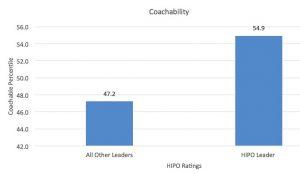 Here are our specific suggestions for conveying to others your receptiveness to coaching and to practice being more coachable.

1. Ask for feedback. The single most powerful thing you can do is to sincerely ask for feedback from your colleagues, especially your boss. It can be as simple as asking, “Give me one suggestion for what I could do to be more effective in my job.” The important step is to the open the door to feedback.

3. Thank the giver of feedback and confirm your desire for more. Your response to feedback will determine whether this will be the first of many doses of helpful information, or whether it will be the last you’ll ever receive.

4. Request suggestions on how to improve. The giver of feedback may have some useful ideas about how to improve, change your manner, or start doing something that would make you even more effective.

5. Welcome tough or unexpected feedback. Develop a thick skin that accepts such feedback as a learning opportunity, not a personal attack. 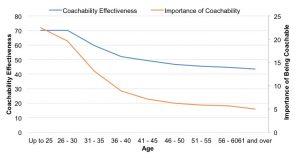 The lesson we need to learn

Many of us have the assumption that someday life will be easy. We will coast along effortlessly and will be successful. As evidenced above, this assumption causes many to start coasting. But this assumption that it gets easier is not true. It is never true because you change, the organization changes and the business environment is constantly evolving. A successful life means constant change and continuous learning. So set a goal now to remain coachable throughout your career.

Take our Coachability Assessment and find out!

IS OUR BUSINESS COACHING RIGHT FOR YOU?

Take our quick assessment to learn if we're a good fit.

Struggling to Manage Your Remote Team?

Consider what the late & great Steven Covey says, “Often times the way we see the problem, is the problem!" I have coached hundreds of managers remotely across dozens of organizations of various sizes since 2007. The shift to remote work didn't change a thing for...

How Coaching is Key to Millennial Happiness

Original article by Sarah Landrum on IFC Free lunch, drinks and coffee. Discounted gym membership. Complimentary MacBook. It may seem as though millennials are attracted to new jobs for these types of perks, but the youngest generation of professionals has a different...

Article written by Robert U Craven CEO at MegaFood When I came to MegaFood in 2011, the company wasn’t thinking much about professional development. That’s not unusual in itself. The company had a great reputation but was small, and growth was the top...

Schedule a Complimentary Session with Nick